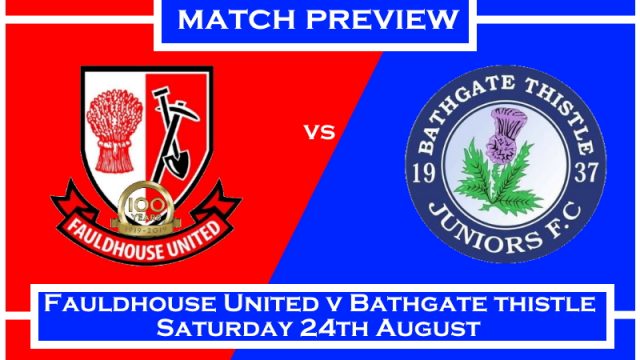 Can The Jags bring ‘The Hoose’ Down?

Match preview brought to you by

Bathgate Thistle will be aiming to put last week’s disappointment behind them and return to winning ways against Fauldhouse United this Saturday.

The Jags travel to Park View this weekend in the McBookie.com South Super League fresh from defeat at home to Harthill Royal last Saturday.  They will be hoping for better luck when they take on the league leaders and will face no easy task in trying to put right what went wrong 7 days previously.

The team should be boosted by the return of top scorer Robbie Feeney and midfield dynamo Sid Easton who both missed the game against the Royals.  The Jags still sit third in the table and will not want to lose any more ground this early to The Hoose in what looks like being a massively competitive division this year.

Fauldhouse United have started the league campaign with a fine run of results so far having recorded wins over Whitburn Juniors, Armadale Thistle, Livingston United and Lochore Welfare.  In their other match they drew 4-4 with Pumpherston Juniors.  Fauldhouse manager Jon Connolly is currently sidelined with ill health so the team is being looked after in his absence by players David Dunn and Mark Daly – we wish Jon well in his recovery.  Their skipper is ex-Jags favourite Sammy Watson.

Official league sponsors, McBookie, make The Hoose favourites for the points at 1/2.  Jags backers can get the win at 13/5.  A draw is priced up at 9/2.

The match kicks off at 2.30pm and entry is £6/£3 concessions.  A bumper Bathgate travelling support will surely help the lads on their way to victory so please support them if you can.