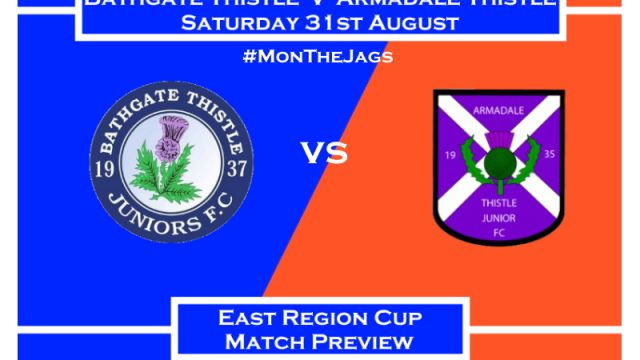 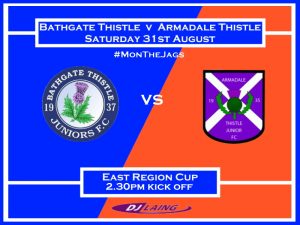 The East Region Cup, as sponsored by DJ Laing, gets underway this Saturday and The Jags have a barnstormer of an opening tie as local rivals Armadale Thistle provide the opposition.

Whilst other derbies might hog the headlines in other parts of the country this weekend the only one that counts for Jags fans is the one against fierce rivals Armadale Thistle.

Bathgate Thistle will be hoping for a repeat of their opening league fixture of 2019/20 when they recorded a thumping 3-1 win over The Dale at Volunteer Park.  That day a terrific hat trick from skipper Robbie Feeney put our rivals to the sword and the only surprise was that the winning margin wasn’t bigger.  Since then it’s been a mixed bag for Bathgate as they have won three, lost three in the league.  Performances have been good though and we are still in touch towards the top end of the table.  In a hugely competitive division this year it’s all to play for and a positive result today will hopefully lead to a positive run of form in all competitions.

Armadale Thistle have themselves had a topsy turvy start to the season.  They of course opened with a loss in the derby then followed that up with an away defeat to Fauldhouse. They recorded their first win against Kennoway Star Hearts and in their last fixture thumped Harthill Royal 5-nil.  Manager Derek Strickland has added experience to the side in veterans Robert Sloan and Scott Dalziel and they will be looking for revenge at The Creamery.

Derbies are always highly charged affairs and this one coming so early in the East Region Cup adds an extra level of excitement to what promises to be a cracking game.

McBookie, East Region Juniors sponsors, have the Bathgate Jags as favourites for the win and are odds on at 4/7.  The Dale are available at 9/4.  If you fancy a draw at 90 minutes then you can back that at 9/2.

Kick off is at 2.30 this afternoon and a bumper home crowd could prove the difference.  Your support as ever is vital.  Entry is £6 (£3 concessions).