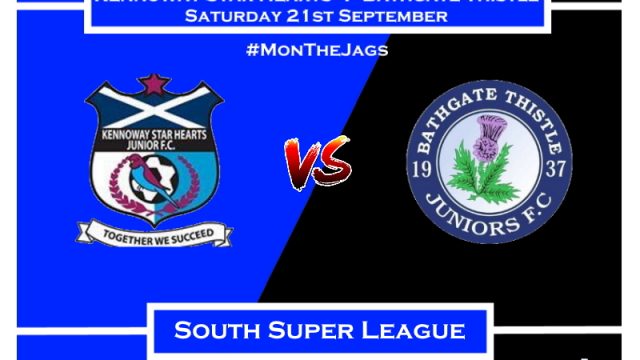 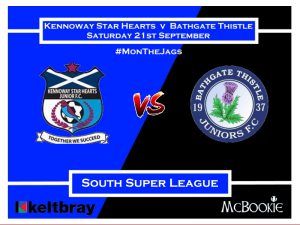 Bathgate Thistle emerge after their free weekend with a tough away fixture on Saturday afternoon against Kennoway Star Hearts in the McBookie South Super League.

Following their fine 6-2 win against Thornton Hibs The Jags will be hoping to continue in that vein against another Fife side.

Bathgate will have to make do without the suspended Aiden McKee but have no other suspensions to worry about for the trip over the Queensferry Crossing.  Robbie Feeney is fresh off a hat trick in his last outing and will be hoping to stay on the goal trail as Thistle look to improve on their current league position – they lie fifth after 7 games.

Kennoway Star Hearts currently lie 9th in the league having played a game more than The Jags.  They have a mixed home record this year with two wins and two draws from their four games so far and managed a tight one nil victory over Pumpherston Juniors in their last league game at Treaton Park.

League sponsors McBookie  make Bathgate the favourites for the points and have priced them at 4/7 on.  Kennoway Star Hearts are 9/4 for the win.  Draw backers can get 9/2 if they fancy a stalemate in Fife.