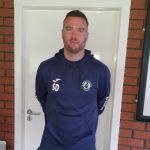 Stewart has a long playing career. He spent 10 years at Stirling Albion, 1 year at Stranraer, 5 years at Bo’ness United, 2 years at Linlithgow Rose, 1 year at Blackburn Utd, 1 year at Fauldhouse then onto Bathgate Thistle initially as a player/coach before taking on the Manager role.

When he gets the opportunity he follows Hibs