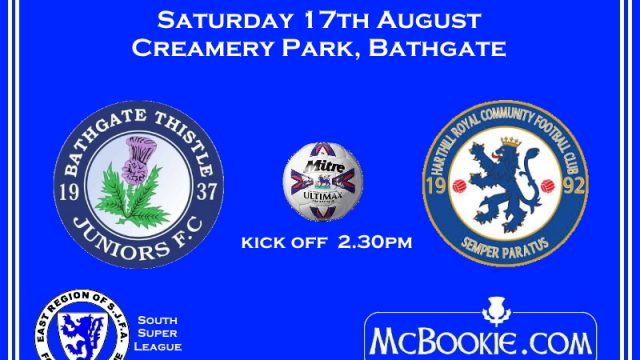 The Jags aim to keep the Royals off their throne

Bathgate Thistle will aim to make it 4 wins from their first 5 games in this seasons McBookie.com South Super League when Harthill Royal CFC come calling this Saturday afternoon.

The Jags currently have the best defensive record in the league having conceded only four times so far this campaign and will be hoping that their defensive strength will provide the bedrock for another home win.  They hold wins over Livingston FC and Lochore Welfare so far and sit third in the league just a solitary point from the top.

Harthill Royal CFC visit Creamery Park hot off the heels of a narrow win against their big rivals Whitburn Juniors in midweek.  Craig Johnston was on the mark twice in a 2-1 victory.  The Royals currently sit eighth in the league having lost their other two league fixtures so far but it’s still early days and they will be hoping to make it two wins in a row against The Jags.

Our league sponsors, McBookie, make Bathgate favourites at 2/7 to grab the win, with Harthill 21/5.  You can get the draw at 11/2.